How does Kansas Child Support Compare to Other States?

Home Blog How does Kansas Child Support Compare to Other States?

How does Kansas Child Support Compare to Other States?

The chart below is based on the state-by-state child suport comparison study conducted by Dr. Jane Venohr with the Center for Policy Research.  Dr. Venohr's data was published in a JAAML article, as referenced in the chart.  I've plotted the data against a regression curve to illustrate a general trend.  From that trend, it's noted that, at a similar cost of living, KS sets itself apart from its peers as one of the highest child support states.  At 28% above the regression line, KS earns the bronze for the 3rd highest child support amount!

One of the considered baseline cases is a 2-child family at median income levels.  This would be considered a very common scenario for most states.  For many years parents and practitioners have been assured by the Kansas child support committee that Kansas is one of the lowest paying states.  This latest data would seem to contradict such an assertion.   In response to the study, some Kansas committee members rebutted, their goal is for Kansas to be one of the highest child support states.  Based on the data shown, Kansas is very near that goal.

Kanas defintely sets itself apart from it's peers, but maybe that's by design.  Kansas uses a unique economic model developed by Dr. William Terrell, former professor of economics at Wichita State University.  His model and assumptions have been carried forward by Dr. Jodi Messer Pelkowski, associate professor at Wichita State University.  At this time, we're not aware of any other state using Kansas' unique model.  Most states use more universally recognized models such as the Betson-Rothbarth, Espenshade, or some variation of those.  Betson-Rothbarth-based models, by far, comprise the majority of the guidelines economic models.  It is noted that both IA and SC, which are referenced in the plot below, use a form of the Betson-Rothbarth model.

Whether the Kansas economic model accurately predicts Kansas parents' expenditures on children could draw some question.  Kansas child support awards are nearer to that of California and New Hampshire than midwestern states such as Iowa, Oklahoma, and Missouri.  It's unclear why that might be, but asking questions is a good first start. 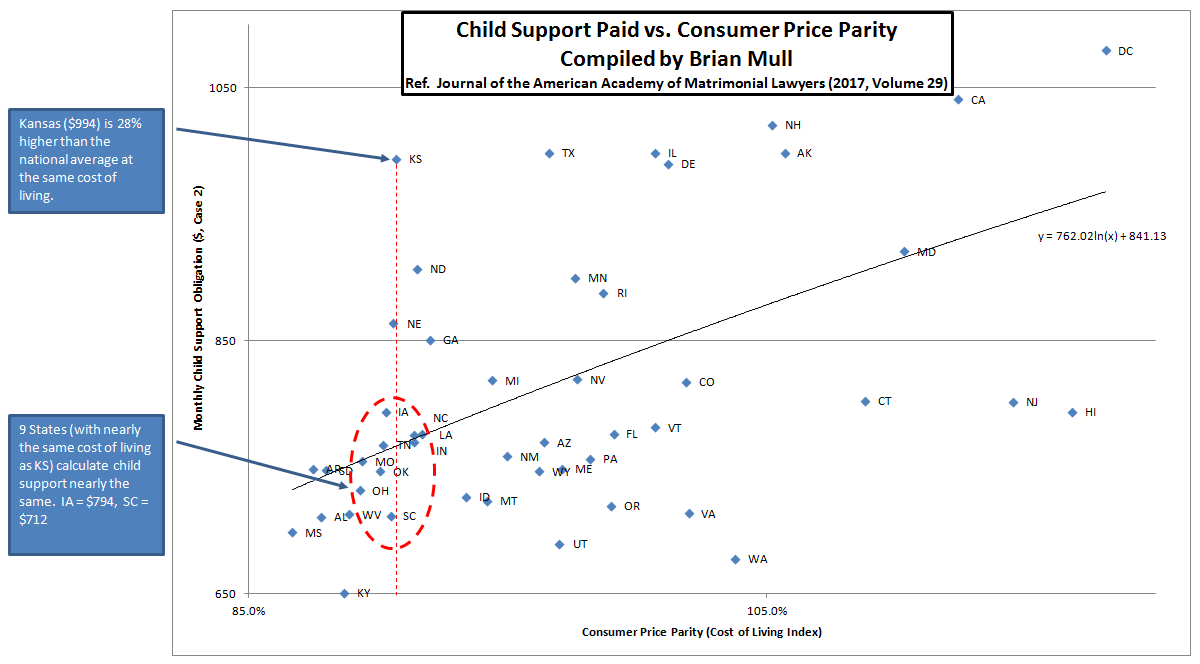 Have a blog idea?

If you have a suggestion for a good blog article, please contact us. Most blog articles found here are actually based on questions had by our users.